"If you don’t pay any money, how will you find any babies?"

The article below is a substantially redacted version of a more indepth treatment of the subject I have available on our subscription blog. I offer that as an explanation for why this article may seem choppy or incomplete in places. To protect the identities of many of the witnesses to the CCAA conference, orphanage baby-buying programs, etc., I have removed them from this public forum.
_______________________________

BEIJING, Nov. 24 -- Some orphanages in central China's Hunan Province had been selling babies to make money for many years, a Hunan based newspaper reported today. Police in Qidong County have caught more than 20 people this week, including the heads of some of the orphanages.

In late November 2005 the world was made aware of a relatively small story in Hunan Province detailing baby-buying by orphanages involved in the international adoption program. While the CCAA loudly worked to contain the story by creating a "wall of silence" around the press coverage and limiting the number of orphanages involved, behind the scenes it was quietly dealing with a controversy of its own: How to calm the hundreds of orphanage directors who were involved in the same activities and now were terrified of being caught and made known.

In response to such concerns, the CCAA called a conference to be held on February 16-17, 2006, in Tianjin. Invited were directors from fifteen Provinces, and ironically the meeting was called to formalize China's ratification of the Hague Agreement, which occurred the previous September. The published agenda indicated that sessions would discuss international adoption, baby fostering and domestic adoption. Absent from the official reports is any discussion concerning the Hunan scandal and the CCAA's reaction to the baby-buying trials that were beginning the following week in Qidong, Hunan. The orphanage directors in attendance were understandably concerned. The six directors who were being tried were accused of doing what many in the conference were doing -- offering substantial sums of money for healthy infant girls. The CCAA thus put clarification of "reward" protocols on the agenda.

The Qidong orphanage directors were accused (and convicted) of purchasing babies from traffickers for 2,500 yuan. The CCAA had taken specific steps to limit the fall-out from the Qidong scandal, including protecting its largest player -- the Changsha First orphanage in Hunan's capital. But at this conference of directors, the CCAA wanted to spell out how far the directors could push the line and still be protected by the government.

In response to the growing international concern surrounding the scandal, the CCAA closed Hunan Province from December 2005 through April 2006, requiring the local Civil Affairs Bureaus to hold all files. This had an immediate impact on the number of children available for adoption, since Hunan Province was the second largest Province for adoptions (behind Guangdong Province). As a result, wait times began to increase. While the wait time from when an application was submitted until a child was referred had been stable at 6-8 months from October 2003 through December 2005, in January 2006 it broke out and hit nine months. By the time most of the Hunan orphanages were allowed to resume submissions in April 2006, the wait had reached 12 months. Like a drain with a small obstruction, the backlog began to build as the supply-demand equation was disrupted by the closure of Hunan Province. When adoptions resumed from Hunan in April 2006, most waiting families and other observers (myself included) anticipated a decline in wait times once Hunan Province returned to normal. Instead, the wait has continued to increase every month since the scandal broke, and now stands at forty-one months. 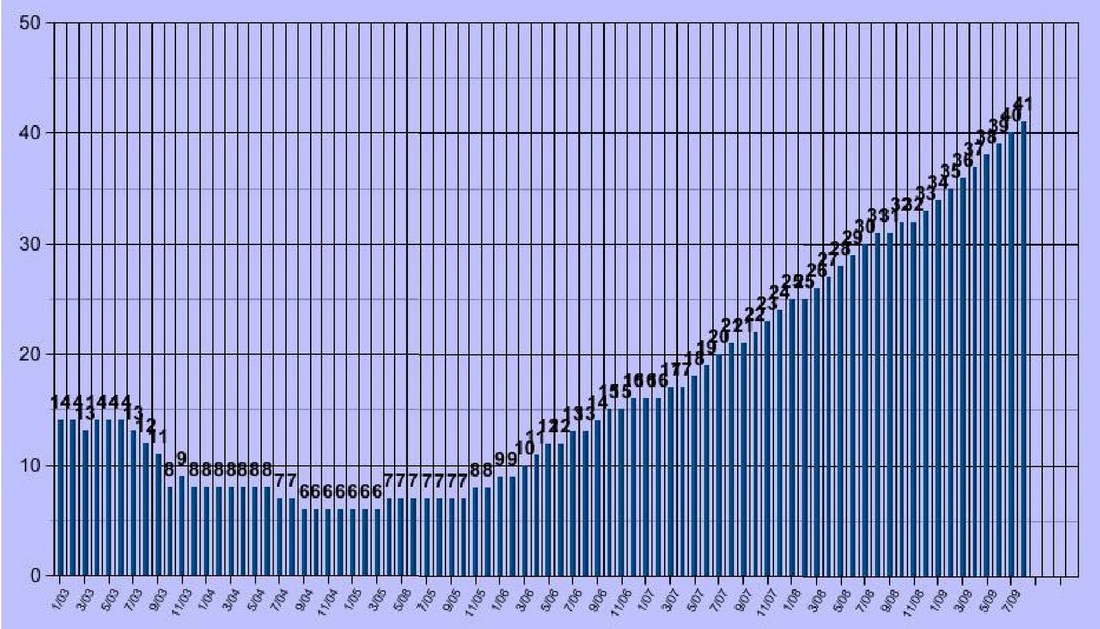 With three years of subsequent data to look at, we can now understand why things never returned to "normal".

Hunan Province
The impact of this conference can be seen in the adoption submissions the following three years. Hunan Province itself saw dramatic changes in adoption rates by individual orphanages, and these changes reveal the extent of the baby-buying programs throughout the Province. It must be remembered that the primary defense of the Qidong directors at trial was the contention that many, if not most, of the area orphanages were involved in similar programs. This is borne out by the changes that occurred following the February 2006 conference.

In 2005, thirty-three orphanages participated in the international adoption program in Hunan Province. When one looks at these orphanages collectively, suspicious changes occurred in eighteen of them. These eighteen orphanage saw submissions decline on average 87% between 2005 and 2007 (adoptions were halted in Hunan for four months in 2006, so a comparison with that year is problematic, although steep declines are apparent). 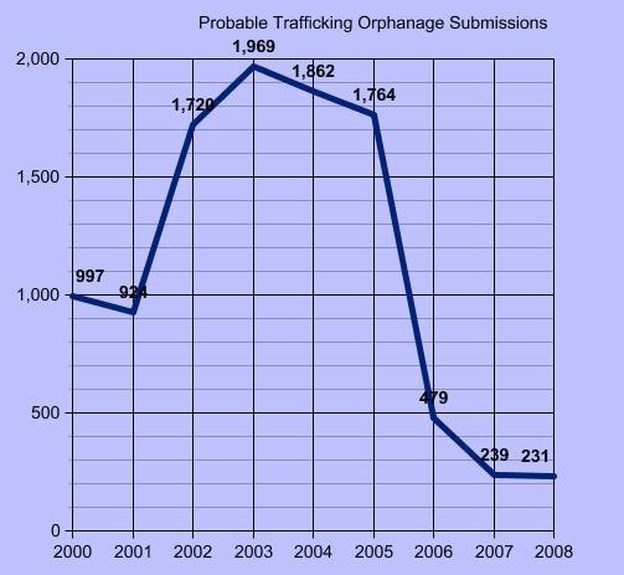 While the steep decline in submissions is by itself a reason to wonder if an orphanage was buying babies, internal data also presents additional reasons to suspect that baby-buying was occurring. For example, Zhuzhou City orphanage, the whistle-blower in the Hunan scandal, saw submissions fall from 26 children in 2005 to only five children in 2006 and three children in 2007. Additionally, over twenty children were found at the gate of the orphanage each year between 2000 and 2005. Orphanage gate findings collapsed after 2005 to only about five per year, a 75% decline.

Yiyang City saw a similar pattern. After submitting 101 files for adoption in 2005, Yiyang saw its submissions crash to only eighteen in 2006 and twelve in 2007. Its internal patterns also bore suspicious patterns. Between 2000 and 2008, for example, nearly sixty-five percent of all findings were at the gate of the orphanage, a common tell for trafficking orphanages. Like Zhuzhou, Yiyang's finding patterns changed substantially after 2005, with orphanage gate findings falling from thirty-three in 2005 to only eight in 2006 and three in 2007. Additionally, Yiyang City submitted only four boys for adoption between 2000 and 2008 (about 1%), substantially lower than Hunan Province in general (8% in 2006 for example). Low gender ratios are one of the surest indicators of baby-buying programs, because orphanages specifically target families giving birth to female children.

Collectively, the eighteen orphanages that display characteristics of baby-buying accounted for over 85% of all Hunan adoptions in 2005. Put another way, of the twelve thousand children adopted from Hunan Province between 2000 and 2006, over 9,700 of them came from orphanages with substantial evidence of trafficking.

Jiangxi Province
Patterns of baby-buying aren't seen just in Hunan Province, however. A study of every one of the fifteen Provinces participating in the international adoption program results in similar patterns all over China. Few, however, have as many suspect orphanages as neighboring Jiangxi Province. A study of this Province's orphanages displays patterns that indicate that baby-buying was/is even more widespread there than in Hunan.

The number of orphanages involved in trafficking in Jiangxi is very significant. As was the case in Hunan, a majority of orphanages in Jiangxi were also involved in baby-buying. Of the forty-four orphanages participating in the international adoption program in 2005, thirty-four (77%) show substantial evidence of trafficking. These orphanages supplied nearly 83% of all of the children adopted from Jiangxi in 2005. To put it another way, over 12,500 children adopted from Jiangxi between 2003 and 2008 came from orphanages with probable or confirmed baby-buying programs.

When one looks at the orphanages around China that experienced steep declines in adoptions following the February 2006 CCAA meeting, or that display other signs of trafficking -- dearth of male foundlings, or those with special needs, or that have large finding clusters at the gate of the orphanage or area hospitals -- it becomes clear why the CCAA was terrified in December 2005 that investigations inside China would lead to an explosion of revelations of orphanage baby-buying, and most likely result in the closure of its international adoption program.

Some orphanages apparently took the CCAA's words of caution seriously, lowered the amount of money they were willing to pay for children and saw their adoption programs collapse as a result. Other orphanages shrugged off the warnings and continued with their programs, and have seen steady adoption programs as a result. Some initially went into hiding, but have since returned to the market place (Changde was shown by ABC News in 2008 to be again openly buying children for 2,500 or more yuan).

The fact that the CCAA openly discussed the issue with all of the directors involved in international adoption shows how wide-spread the problem was, and continues to be. But was the CCAA aware of the number of orphanages buying babies? "Yes," was the response from a Jiangxi orphanage director I interviewed. "I think the CCAA has the same problem as the orphanages. If there are no adoptions, then they will have to close. So the CCAA encourages the orphanages to buy the babies, but they are also afraid that the orphanages will get caught!" And what happens if an orphanage doesn't pay money as a reward for babies? "If you don’t pay any money, how would you find any babies?"

Ultimately, the CCAA and the Chinese government controlled the Hunan story, convinced the world that the problem was isolated to a few orphanages, and that the directors of those orphanages had been punished. "In reference to the incident in Hunan," the CCAA wrote the Dutch Justice Minister in February 2008, "I would like to reaffirm that all of the children involved for inter-country adoption are all abandoned children, who were placed for adoption in accordance with the principle of 'children's interests as the priority' and the whole procedure was legal and in light of the spirits [sic] of Hague Convention. The adoptions are protected by law and will not cause any problems for the adoptive families. It is known that these children are well cared for in the adoptive families and are doing fine. It is better not to pursue, expand or elaborate on this issue further and to keep secret for related families in order not to interrupt the bond established between the adoptive parents and the children and impose any unnecessary pressure on them."

Even as the CCAA was granting approval for orphanage directors to pay money in incentives, telling them they would be protected if they paid no more than 1,000 yuan per child (more than 6 month's income to most Chinese families), but implicitly instigating a "don't ask-don't tell" environment for the orphanages to work in, they were telling the Dutch that they shouldn't do any more investigations into these issues.

But the trials had their effect. Across China many orphanage directors apparently concluded that the risks involved, as well as the ethical problems, were no longer worth the trouble. Many of these orphanages reduced their finders fees below 1,000 yuan.

The decision to increase the adoption donation was a transparent attempt by the CCAA to increase the incentives for the orphanages to adopt children internationally, thus providing additional monies for incentive programs. As the increase came into effect in January 2009, employees in the CCAA expressed confidence that the wait times would soon begin falling as more children were submitted for adoption. Fortunately, this has so far failed to materialize. How long will orphanage directors be able to resist the funding that each internationally adopted child provides? Given the poor public funding for orphanages, and the increasing overhead most directors face, how long can these "reformed" directors hold out before returning, like the Changde orphanage in Hunan, to the available market of black-market children?