The Value of a Grain of Rice 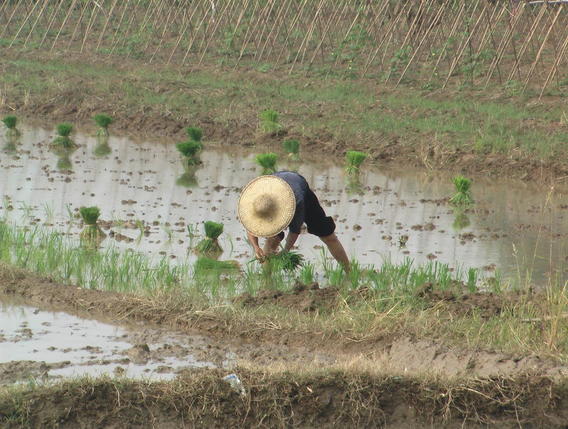 The following essay was written while I researched in beautiful Guilin (Guangxi) in August 2005.

The countryside was a blur from my taxi window as we headed back toward Guilin. In front of me, in a broken mosaic of olive and green patches, were the acre-sized farm fields. Some held grape vines, hanging heavy with the year’s production. Most, however, contained the nearly white heads of rice, on this August day ready for harvest.

Suddenly my eye was drawn to a group of four people laboring at a small mechanical rice thresher. I bid our driver to stop, and exited my cool taxi into the blazing heat of a Chinese summer day. I strolled into the field, and settled down to watch, beads of perspiration already falling from my forehead.

All around me the rice had been hand cut and gathered into bunches, tied with a single strand of rice stalk. As I watched, the bundles were systematically gathered, carried over to the small automatic threshing machine, and their heads thrust into the teeth of the turning cylinder. With their seed ripped from their light golden husks, the bundle was laid into a pile to be burned at the conclusion of the harvest, its ash providing the nutrients for the next planting. Under normal circumstances this would be difficult work, under the heat of today’s sun it was nearly unbearable.

As I sat listening to the rhythm of the harvest, my mind remembered the beginning of the life cycle whose end I was now witnessing. Early in the Spring, when the fields are flooded by the monsoon rains so common in China, I have watched as the farmer struggles behind his ox, knee deep in thick gray mud, preparing the ground for the young rice stalks that would soon be planted. It is an image as old as China. Farmer and animal alike are caked in mud, walking back and forth across the field, the soil being turned by the long wooden stakes being pulled by the ox. Occasionally one hears the farmer coax, then command the animal on, stopping only infrequently to catch their respective breathes.

In the next field one might glimpse the bobbing straw hats of another farmer family. Here, still deep in flooded ground, the farmers stand, bent at the waist, their hands darting in and out of the mud, each jab leaving a tender, single strand of a rice seedling. Each farmer works a band three to four feet wide, as far as they are able to reach on either side. Up and down they work until their rice paddy is filled.

As I sat today and watched the harvest, I realized that no stage of rice production is easy. From the struggle against the soil in preparation, to the back breaking strain of planting, to the relentless sun of the harvest, it seems that nature fights the farmer at every turn. And the struggle is not yet over, for each farmer will take the harvested rice home to lay out in the hot sun to dry, a process that will require many turnings and sifts in order for the rice kernels to dry enough so that they wouldn’t spoil on the way to market.

It may seem obvious to others, but I need frequent reminding where my food comes from. At home, I run to the store and quickly grab my bag of rice or beans, my plastic-wrapped meat, my gallon of milk, and rush home without giving a second thought to the cost of the food. I don’t mean the price I pay at the register, but the cost in human terms of the food I take for granted daily.

China doesn’t allow that luxury. Meat is purchased by most Chinese families still on the hoof. Markets are crammed with baskets and cages of live chickens, ducks, and pigs which are purchased and slaughtered on the spot. Vegetables and fruits are grown by ones neighbors, the grains bagged at the local co-op down the street. The Chinese witness on a constant basis where their food comes from, a recognition I appreciate and long for in my own culture.

We have a policy in our house that plates should be emptied as much as possible at dinnertime, but under no circumstances should meat be left uneaten. I instill in my children an appreciation that a pig, cow, or chicken gave its life for their culinary enjoyment, and that to not eat their gift would mean that the animal died in vain. “No one should live and die in vain,” I tell my girls.

But as I watched the farmers today in the hot Guilin rice field, I realized that it is also unacceptable to let the hard labor of our food producers go to waste. For the value of a grain of rice is not measured by the pound at the cash register, but by the sweat that went into producing it. In China the two values are not the same.